Several factors will influence the wear and service life of bushings. They are, among others, specific bearing load, sliding speed, PV value, surface roughness of mating parts, mating surface material, and operating temperature.

The PV value has a considerable influence on the service life of a bushing. The PV value is the product of the specific load (P) and the sliding speed (V). This value is the most important to consider when designing around the use of a bushing. Basically, the lower the PV value, the longer the bushing life. PV values listed for bushings are the allowable values for radial journal rotational operation.

Direction of motion and PV value 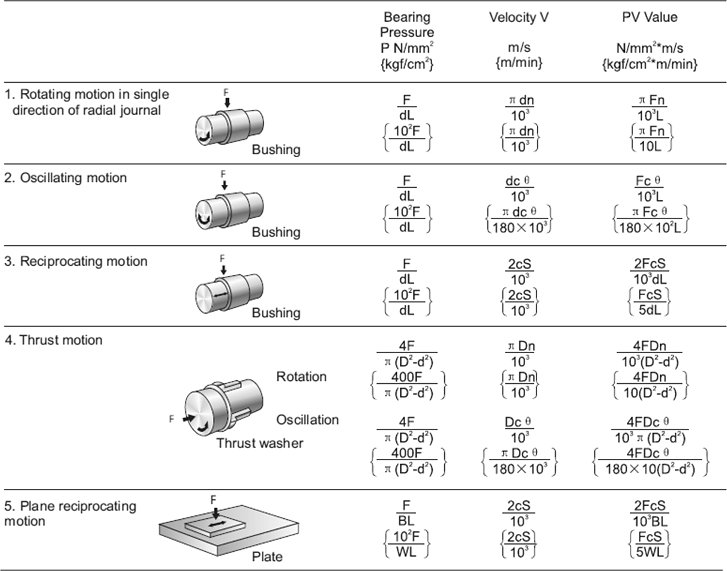 Operating temperature is another major factor when considering the use of a bushing. Clearances between the bushing and housing or between the bushing and shaft can change drastically through a bushing’s operating temperature. Reductions in clearances or increase in interference fits can cause severe wear to a bushing, significantly reducing the service life.

The main cause of heat is the work done at the friction surface of the bushing. It is known that the temperature is more affected by velocity than pressure. When used in high velocity operation, it is recommended that the bushing be used in such a manner that the coefficient of friction is reduced by a positive supply of oil to enhance both the cooling and lubricating properties, thus taking advantage of the bushing wear resistance.

Oscillating motion is another severe condition that can lead to accelerated bushing wear. The zero velocity point between each oscillating cycle is the point where lubrication will be disrupted causing increased fatigue and wear of material. Ball bearings, which are designed mainly for rotational motion, are designed with a very small contact area, causing extremely high contact stress. They are unsuitable for oscillation when compared to the large contact area of a bushing. Self-lubricating bushings are the best choice for oscillating motion due to having a very tough sliding surface which generates few wear particles, and also having internal lubricant which will not cause a disruption in lubrication.

Affect of Temperature on Bushings

The life of a bushing is greatly influenced by operational temperature and heat caused by friction from oscillating and reciprocating motion. For high temperature applications, the PV value of the bushing should be limited to a small value. The heat resistance of plastic bushings is generally inferior to that of metallic bushings. In particular, thermoplastic resins have poor resistance to heat. Also, thermal expansion rates are relatively high. In order to maintain a minimum required clearance, it is important to emphasize dimensional control during the design of these types of bearings.