When a lubrication film exists between two relatively moving surfaces, friction conditions of the two contact surfaces can be classified in three types as shown below: 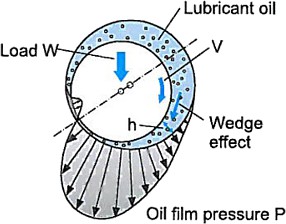 When the lubricating oil film between the two contact surfaces is extremely thin and no viscous hydrodynamic oil film exists between the two contact areas, only the film of absorbed oil molecules exists. An absorptive oil film is the arranged oil molecules that are adhered to the solid surfaces, and its shear resistance is greater than hydrodynamic oil film. Frictional force in this area is greater than hydrodynamic lubrication. At the frictional contact points, the oil film is frequently broken. The lubrication condition that generates a frictional condition such as this is called "boundary lubrication". In order to decrease the friction under this condition, selection of a self-lubricating bushing may be desirable. 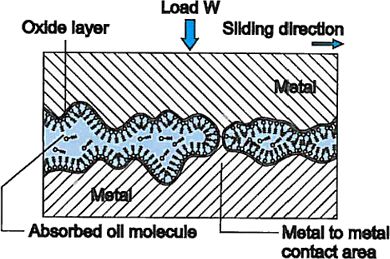 Under this work condition, the two solid surfaces are in direct contact with each other, there is no external lubrication such as a hydrodynamic film or absorptive oil film. The frictional force is proportional only to the vertical load applied to the contact surface of the solid body. The coefficient of friction is independent of the sliding velocity and the static friction is greater than kinetic friction.  A self-lubricating bushing material selection is critical to performance in such an application.