Read More
Back to Previous Blog Causes Behind Bearing Failure

When bearings fail to meet their expected life or performance levels, the consequences are far reaching and include increased down time, high maintenance costs, loss of revenue and missed deliveries. The following are some typical reasons behind bearing failure. 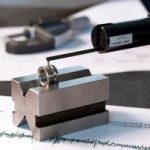 Brinelling – Bearing raceway damage that is usually caused by the mounting or dismounting of the bearings (typically from a thrust force). It is identified by minute dents corresponding with the ball locations high on the shoulder of the race. However, brinelling can also be caused by hammer blows to the bearing or a shock load exerted on a static shaft.

Cage Damage – There are a number of causes for cage damage, some of these are: vibration, excessive speed, wear, & blockage.

Contamination – Contamination failure is caused by the entrance of foreign objects into the bearing which leave marks such as, scratches, pits and lapping of the raceways.

Electric Arcing – Electric arc erosion occurs when an electric current, passing through a bearing, is broken at the contact surface between races and rolling elements. This can produce high temperatures at localized points.  This produces pits on the raceways and rolling elements. Some causes are static electricity from belts along with faulty wiring and short circuits.

False Brinelling – Bearing ring damage which is caused by vibration in a static bearing. This may occur during transport of equipment or by vibration from running equipment. The tell-tale indications are axial and circumferential indentations on the raceways. Although its appearance is similar to that of Brinelling, False Brinelling is characterized by attrition of the steel and is the result of a combination of mechanical and chemical action.

Fatigue Failure – Commonly characterized by flaking or spalling of the raceway.  Fatigue failure is a result of a granular weakening of the bearing steel which begins at the sub-surface and propagates to the raceway. While this may occur at the end of the normal life expectancy of the bearing, it frequently occurs before then due to excessive loads.

Lubrication Failure – If the grease is stiff or caked and changed in color, it indicates lubrication failure. The original color will usually turn to a dark shade or jet black. The grease will have an odor of burnt petroleum oil. Lubricity will be lost as a result of lack of oil. In cases of Lithium base greases, the residue appears like a glossy, brittle varnish which will shatter when probed with a sharp instrument.

Misalignment – When one side of a bearing is misaligned in relation to the other, the ball or roller path will run from one side of the race to the other around one-half of the circumference on the non-rotating ring. The rotating ring will have a wide roller path. This can result in high temperature and destroy the lubricant

Watch our process for failure analysis testing to understand why a bearing failed prematurely and determine actions to be taken to prevent future failure, or contact a bearing specialist with your questions.